Daniel Gardner’s editorial July 23, 2019 was very inspirational.  I admire devout persons like the astronauts Mr. Gardner describes.  Long ago I came to believe that human beings were created to be God’s “eternal companions.”  This is more meaningful now since contracting an incurable disease.  The times I almost died brought about a reexamination of perspectives.  Suffering taught me to be grateful to God for what I have been given even if at times I would prefer otherwise.

I could easily become angry at the unfairness.  It is common to believe in God based on preconceptions.  In Robert Anderson’s The Silence of God, he says there is a common belief that “if the Christian God were not a myth He would not remain passive in the presence of all the suffering and wrong that prevail in the world” (Anderson 29).  Compare this with the truth about benefits and adversities found in the New Testament: it “rains on the just and the unjust” (Matthew 5:45).

It would be easy to be envious of others’ successes.  I have learned that our abilities are gifts and have no permanence.  Confidence based on believing we deserve the good life is an illusion.  We are responsible for our responses in the worse possible moments.  I have attempted to accept the life I have graciously and be able to say, like Paul, “I have learned, in whatsoever state I am in, therewith to be content” (Philippians 4:11).

I cannot deny that my reason for my confidence is because I know this life is an incredibly small portion of eternity.  Whenever I think my standing in life is not exactly as I would wish it, but I look toward the infinite panorama of the future.  Sometimes I feel just like an astronaut strapped in and counting down. 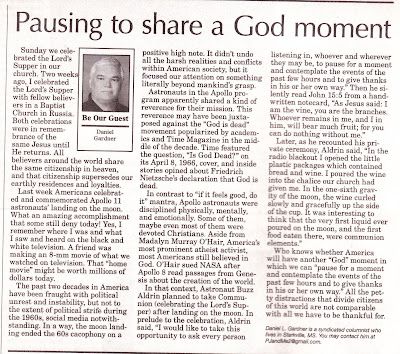 Murphy's Law is one reason not to give up any weapon or capacity. https://www.quora.com/Why-do-people-need-extended-capacity-magazines...